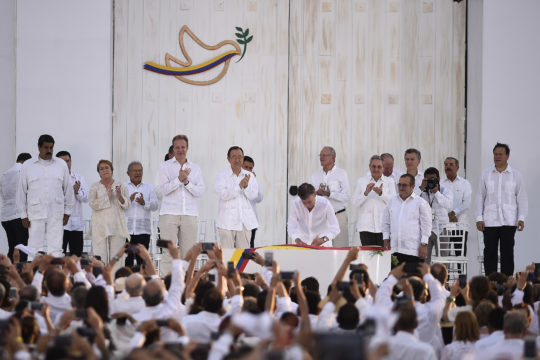 After decades of armed conflict and the signing of peace agreements with the FARC, Colombia is in its crucial moment for future well-being. However, the normalization process is facing multiple problems that affect both the international community perception about this process and the application and real development of the same in the field and in civilian life. The initial optimism, due to the historical passage to the Special Jurisdiction for Peace and the Transitional Justice and Peace Process, has been confronted with the reality of the Colombian context that discloses different matrices of violence, many of which reveal the partial responsibility of the FARC in territorial crimes, and confirm the opinions of those who affirmed the co-responsibility of the extreme right paramilitary groups in the conflict.

The FARC guerrillas’ departure from their territories let criminal armed groups exploit new sources of income for their criminal interests: the latter extreme right paramilitary groups, now demobilized and reorganized into smaller groups called BACRIM (criminal gangs), are taking control of rural areas for coca production, which has soared to alarming levels with respect to the dynamics of the past years and favoring cocaine production (+ 42% in coca cultivation and + 60% in cocaine production in 2015, with expectations of strong growth in 2016 and 2017, data not yet elaborated) [sources: 1, 2; read more in 3]. This process of drug trafficking’ intensification goes directly against what the Government has proposed to do – supported by the international community – for the country’s new development path.

The first victims of this upsurge are peasants and social leaders in the armed conflict most affected areas: Cauca, Guaviare, Nariño, Caquetá, Putumayo, Norte de Santander. Although conflicts between the FARC and national forces ceased, violence also erupted, 56 social leaders were killed since the beginning of the year [4], leaving indigenous and peasant communities at the new drug trafficking cartels’ mercy.

The coca crops substitution process was affected in the same way: the constant threats of the Bacrims impeded the process development while the peasant communities’ attempts did not receive enough support and protection by the state. Rural mobilizations to demand government responses are intensifying these days, however, the situation between peasant and indigenous communities and state forces is ambiguous: in Tumaco (almost 200,000 people, 147 violent deaths in 2016) in the department of Nariño, 6 civilians were killed by the Public Force in the midst of a coca protest [5].

The drug trafficking context has evolved over the last decade: illegal trade takes advantage of new alliances between Mexican cartels and Colombian producers for export to the United States. Mexican illegal armed groups entered Colombian territories, especially in Nariño, to ensure control and use of coca fields and laboratories for production, transforming the territory into a high-risk zone. According to the National Police, anti-personnel mines were found along illegal crops during forced eradication activities, armed men with a clear Mexican accent command the peasants by establishing the amounts of production and the price of crops [6, 7, 8].

The situation requires a mobilization of resources and interest that Colombia alone cannot guarantee, nor does the national armed forces still have an adequate presence in the territory, which can lead to exceptional situations of confrontation between communities and police, as happened the 5th of October in Tumaco. The international community support, to solve a transnational problem such as illegal substances’ trade at the global level and its implications on the peace process in Colombia, is essential. However, the intervention modalities still have to be established, because simple financial aid does not seem to be the solution.

On the other hand, in the departments where the drug trafficking conflict has ceased, peace-driven economic and social development has not yet taken off. On the Caribbean coast of Colombia, involved in multiple drug trafficking corridors, new forms of economic income are needed to counterbalance the bacrims’ interests, proposing economic alternatives to communities and avoiding the recruitment possibility for these organizations. The related activities, supported by the international community, suffer from the extreme corruption and uncertainties generated by administrations lacking in professional know-how. Land tenure plans (POTs) are lagging behind in many municipalities, community contextual analyses for victim support and land restitution programs suffer of staffing lacks, social needs caused by events that are not directly linked to the past conflict are not addressed, compliance with the agreements for social and economic improvement are still at the starting level.

La Guajira, Magdalena and Bolivar, whose capital Cartagena generates the largest flow of tourism at national level, suffer of deep problems in terms of poverty and extreme poverty, lack of basic services and low school insertion among others. The department of the Atlantic nevertheless seems to grow due to the industry of its capital, Barranquilla, the true economic centre of the region.

The global economic slowdown has finally affected the promising Colombian economy: falling oil prices stalled investments – highly relevant in the north and the coast – compromising the real domestic exports’ driver, which limited intervention plans’ revenues. The whole social context for development was affected: cutbacks in public education are the first indicators of the limited financial balance.

It is important to note that the international community should more effectively strengthen the development where the conflict is over, while in the territories concerned by violence against peasant and indigenous communities, a great effort for the transition to a situation of true peace still needs to be made, enabling the necessary context for social and economic development.

In this sense, focusing on sustainable economic development, it seems imperative to direct international aid towards strategic themes that can boost economic and social development: financing of new academic collaborations between Colombian and foreign universities, support for promising sectors such as sustainable tourism, improvement of the traditional rural sector, interventions in basic services and infrastructures; actions that need to be looked at in the territories that managed to stabilize their civil situation, so as not to deplete resources in sustainable development plans where violence erodes sustainability and people faces a day by day life.

With regard to the territories still plagued by drug violence, an equal effort is required on different issues: military collaborations for territorial and coastal control, support for demining, presence of international observers to ensure population security, measures to guarantee the communities’ human and territorial rights. Without the results that these interventions can grant, there will not be the necessary conditions for the implementation of economic and social development actions.